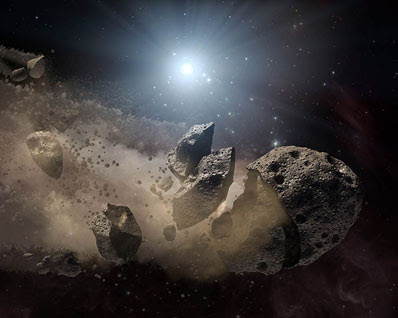 Using NASA's Spitzer Space Telescope to study white dwarf stars, astronomers have found the dusty remains of ancient solar systems.
White dwarfs are the dense glowing embers of Sunlike stars. While their atmospheres should consist entirely of hydrogen and helium, they are sometimes contaminated with heavier elements like calcium and magnesium.These metals really shouldn't be there.That means they are external pollutants.
The rocky debris imaged by Spitzer probably represents the innermost planets of a solar system that were ripped apart by the gravitational forces of their host star at the end of its life. Extrapolating our own Sun's life into the white dwarf phase, simulations show that the Earth may not survive, but that Mars and asteroid belt would probably lie outside of the Sun's grasp.
Perhaps the most exciting and important aspect of this research is that the composition of these crushed asteroids can be measured using the heavy elements seen in the white dwarf. In one case 17 heavy elements were found in one star, yielding a composition that closely matches the equivalent of a combined Earth and Moon. The next step will be to search for those ingredients that may suggest that life-bearing planets may once have existed in these systems.


- Spitzer Telescope Detects Dust Around Carbon Star
Dust plays an important role in the evolution of galaxies like our Milky Way.With the help of NASA's Spitzer space telescope researchers have observed dust forming around the carbon star MAG 29, located 280,000 light years away from a smaller galaxy...

- Planets Like Binary Stars, Too
In our solar system, planets, comets, asteroids, and dwarf-planets all orbit around a single star, our Sun. But imagine if we could witness two Suns in our sky. NASA's Spitzer Space Telescope has helped astronomers see that planetary systems are...

- Our Neighbors In Space
We have a special feeling toward the other planets that circle our sun.  Maybe it?s all the science fiction stories about visiting the moon, Mars and other planets.  But we love to think about those planets that make up what we call ?the solar...

- What Is A White Dwarf?
A white dwarf is a dwarf star and the 'white' that was added to its name was just because, the few dwarfs that were found during their discovery appeared white--I'm not kidding, that's true. Do you know how dense a typical white dwarf...

- Astronomy: Our Space Neighbors
We have a special feeling toward the other planets that circle our sun.  Maybe it?s all the science fiction stories about visiting the moon, Mars and other planets.  But we love to think about those planets that make up what we call ?the solar...