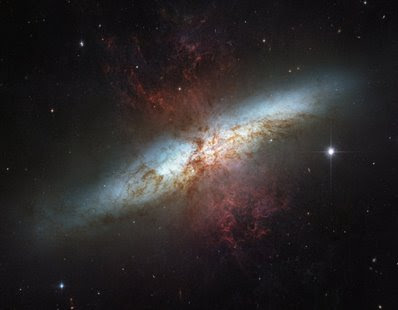 A supernova has recently exploded in the nearby galaxy M82, but you won?t be able to see it with any ordinary telescope. Shrouded in obscuring gas and dust, only the radio emission of the stellar explosion is able to penetrate through to the outside and be detected by the radio telescopes.
The detection was made purely by accident .


- Red Stripe In Space
Image: NASA/ESA So what exactly is that red stripe in the picture? The picture is one of the latest from the Hubble Space Telescope, and the main focus of the image is a red trail of gas. This gas is part of the remnant of a supernova that took place...

- A Humongous Star Explosion
The "SN 2006gy" explosion took place in the galaxy called NGC 1260, 240 million light-years away. It was 100 times more powerful than most typical supernovas, the brightest and most energetic ever recorded. It was first detected in September 2006, using...

- Supernova Smashed Into A Nearby Star
A team of astronomers has witnessed a supernova smashing into a nearby star, shocking it and creating an ultraviolet glow that reveals the size of the companion. In a type "Ia" supernova, a white dwarf star explodes after it gains matter from a companion...

- The Firehead Supernova N 63a
It is estimated that the progenitor of the supernova that produced the remnant seen here was about 50 times more massive than our own Sun. Such a massive star has strong stellar winds that can clear away its ambient medium, forming a wind-blown bubble....

- What Is A Supernova?
There was a star somewhere around the sky staying almost unnoticeable, and got burst out suddenly in to a blistering brightness; it's just a one more Supernova!--if not Nova. The energy and light that was radiated in to the sky during the star's...